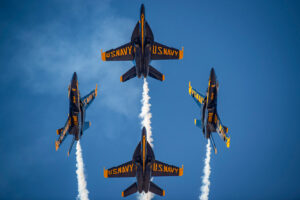 The 2022 Air Show was “Shiny, Fast and LOUD”!  The headliners of the 2022 Air Show were the U.S. Navy Blue Angels showcasing their new F/A-18 Super Hornets for the first time in Cleveland.  The F/A-18 Super Hornet was featured in Top Gun: Maverick.  The Blue Angels transitioned to the larger and more powerful jet platform in 2021.  This marked the first time the team changed aircraft since they moved from the A-4F Skyhawk II to the F/A-18 Hornet back in 1986.  The 2022 line up also included the U.S. Air Force F-16 Fighting Falcon Tactical Demonstration piloted by Captain Aimee Fiedler.  Other performers included an F-15 fly-by, C-130 demonstration, U.S. Army Golden Knights, Randy Ball MiG-17F, Hot Streak Jet Truck, Melissa Burns, Greg Koontz and WWII B-25 Georgie’s Gal.  Saturday’s weather was beautiful and the fans came out in droves.  Unfortunately, the weather negatively impacted the Sunday/Monday flying and we all were disappointed that many of the acts could not perform all three days. The safety of the performers is of paramount concern and the decision of whether it is safe to fly/perform ultimately rests with each performer and commanding officer.