Open year round and free to the public, Marjorie Rosenbaum Aviation Plaza is located in downtown Cleveland at the entrance to Burke Lakefront Airport.

The plaza was the Cleveland National Air Show Charitable Foundation’s inaugural project and opened in 1997. It is a dramatic tribute to Cleveland’s prominence during the “Golden Age of Aviation” when it hosted the National Air Races (1929-1949) and current role as the location of one of the longest running air shows in the United States (1964-present).

The plaza is within walking distance from the International Women’s Air & Space Museum, Great Lakes Science Center and the Rock & Roll Hall of Fame and Museum.

The Marjorie Rosenbaum Aviation Plaza is an impressive landscaped park dedicated to the pilots, performers and airplanes who have thrilled generations of Clevelanders. Along the back of the plaza eighteen significant people, events and airplanes are honored on mounted black granite plaques for their contribution/appearances at the National Air Races in Cleveland from 1929 to 1949. The aviation history has included some of the greatest exhibition flying in the world by such legendary aviators as Amelia Earhart, Charles Lindbergh, Jimmy Doolittle, and Roscoe Turner.

The center of the plaza highlights thirty two renowned Air Show performers who have graced the Cleveland skies during the Cleveland National Air Show from 1964-present. These celebrated aviators include Bob Hoover, Leo Loudenslager, Sean D. Tucker and Patty Wagstaff.

Highlighting this unique historical landmark is two authentic McDonnell-Douglas F-4 “Phantom” jets permanently mounted on pedestals in the center of the plaza. The jets have been painted in the exact paint schemes of the U.S. Navy Blue Angels and U.S. Air Force Thunderbirds, which have thrilled Cleveland National Air Show audiences since 1964. 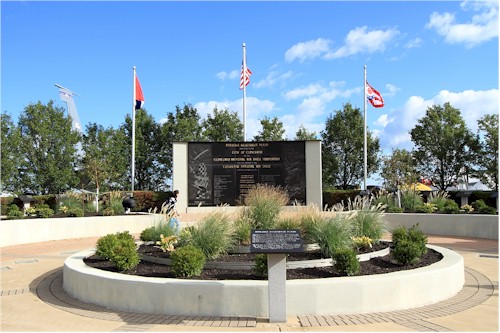 The main wall of the plaza is a dramatic summary of Cleveland’s legacy in exhibition flying. This legacy spans two distinct eras – the first era was the “Golden Age” of aviation during which the National Air Races was the nation’s pinnacle sporting event; the second era is the Cleveland National Air Show which is one of the best showcases of exhibition flying held annually and has become a Labor Day Tradition for nearly 50 years. To the left of the wall an etched montage expresses the Golden Age of pylon races, daredevils, zeppelins and other flying machines. To the right an etched montage expresses the jet teams, stunt flying and precision skydiving featured annually at the Cleveland National Air Show. In the center of the wall is the first stanza of the memorable poem High Flight.

The plaza is a tribute to the free spirit and the striving for perfection demanded by exhibition flying. The men and women in their magnificent flying machines have inspired thousands to soar with them and to share their passion for flight.

The Marjorie Rosenbaum Aviation Plaza was presented as a gift to the citizens of Cleveland from the Cleveland National Air Show Charitable Foundation, Inc. Thank you to the Marjorie and Jacob Rosenbaum family for their generous support of this project.