In 1920, the idea of an Air Show first came to America from Europe when Joseph Pulitzer, publisher of the New York World, put up the money for a race on Long Island’s Mitchell Field. Pulitzer’s goal was to reawaken interest in aviation, which was suffering from post WWI apathy.

The event circulated to different cities for nine years and was finally brought to Cleveland in 1929 by a group of local businessmen headed by Louis W. Greve and Frederick C. Crawford. Greve was president of the Cleveland Pneumatic Tool Company, which made the hydraulic undercarriages that held the wheels on airplanes. Crawford was general manager and later president of Thompson Products Inc., now a part of TRW Inc. Thompson Products developed the experimental sodium-cooled cylinders, which enabled Charles Lindbergh’s Spirit of St. Louis to reach France. 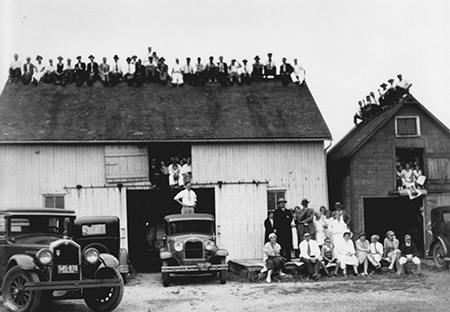 The 1929 Cleveland National Air Races had full civic support not only from the City Manager W. R. Hopkins but from the Cleveland Chamber of Commerce, major industries, the city and the nation’s military air arms. Numerous local business and hotels were approached to underwrite the event and purchase entertainment tickets. Among the supporters the Hotel Statler pledged $5,000. Companies which made airplane parts were also asked to offer cash prizes for the various races.

The event was a 10-day (August 24 – September 2) sensation setting the highest standard for Air Shows with amazing demonstrations, size, duration and attendance. The inauguration ceremonies opened with a downtown parade that rivaled the Rose Bowl Tournament parade. An estimated 300,000 spectators from all over the country watched 200 floats, 21 bands and 1,500 marchers strut down Euclid Avenue as three Goodyear blimps flew overhead. In conjunction with the Air Show, a $3,000,000 display of planes filled Cleveland’s Public Auditorium, 5,000 pigeons were released on Public Square, and aerial acrobatics and fireworks reigned over head. Over 100,000 spectators attended the opening day of the Air Races. 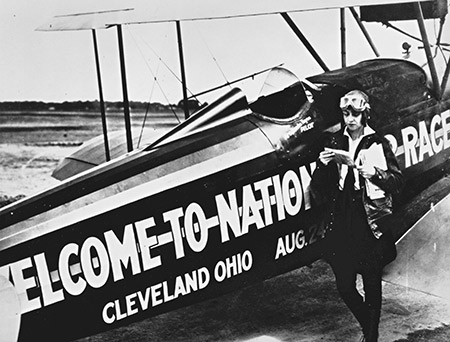 Hopkins (named after the city manager) opened four years earlier as “the first major municipal-owned airport in the world and covered 1,050 acres. Its well lit runways and level surface free from hazards made it an ideal location for such races. The city built permanent grandstands and there were hangers available for visiting aircraft. The airport was so large that the Air Races could take place without interfering in normal airport operations.

In 1929, airplanes were still considered something of a science fiction fantasy, therefore the exciting flying events were reported in newspapers around the world. The daily flying schedule included “dead stick” landing contests, glider demonstrations, Goodyear blimp flights, parachute jumping contests and military demonstrations. The Navy High Hats, a formation team formed long before the Blue Angels, created a worldwide sensation by flying with their planes tied together by one-inch ropes from wing-struts to wing struts. Even the late Charles A. Lindbergh was in the show flying a Boeing biplane. There were also closed-course pylon races and cross-country races from as far away as Log Angeles, Miami and Toronto; all timed to reach Cleveland on different days of the show. Women pilots, including the already famous Amelia Earhart, raced in a special “Powder Puff Derby” from Santa Monica, California, to Cleveland.

But it was the closed-course racing that provided the most thrills for the fans in the stands. The Thompson Race, the first free-for-all closed-course race, was five laps around a 10-mile circuit. “Smiling” Doug Davis, a civilian pilot from Atlanta won the race with an average speed of 194.9 miles per hour. The Thompson Trophy based on the Greek Legend of Icarus who melted his feathered wings by flying too close to the sun, became equal in stature to the Green Jacket of the Masters Golf Tournament. Inturn the world’s top aviators competed for the right to keep it for a year. 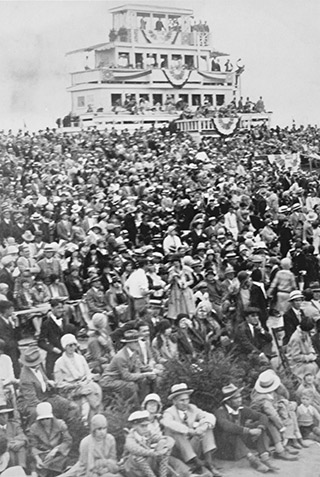 Six pilots were killed during the 1929 event. All but one died during cross-country trips away from Hopkins Airport. Thomas Reid crashed in nearby Fairview Park trying to set a new solo endurance record.

The Cleveland Air Races also had glittering social events each evening, and filled the nation’s newspapers with pictures and stories about the glamorous personalities of the era. Cleveland truly was the aviation capital of the universe for those 10 days.

In 1930 the races were held in Chicago, but the National Aeronautical Association which licensed the races returned the show to Cleveland on the basis of its 1929 success. The Cleveland show had turned a profit of $90,000. The only other show to ever do more than break even was Spokan, Washington, in 1927 with a profit of $485. By 1931 the closed-course races and speed dashes had replaced most of the cross-country races. The Thompson Race first prize was increased to $7,500 which was a large sum of money during the Depression. But it was the danger element, just like the Indy 500, which kept the crowds coming back.

In 1934 the Depression had cut the purses and the show had shrunk to a Labor Day weekend festival, similar to today’s Air Show. It was also in 1934 that the first closed-course racer, Doug Davis, went down. Davis’s death allowed Roscoe Turner, the flamboyant barnstormer, to win his first Thompson Race. Turner returned the next year, losing the Bendix race from Los Angeles to Cleveland by 23 seconds to Benny Howard. Turner vowed to win the Thompson Race, which had been increased, to 10 laps around a 15-mile course. Over 85,000 spectators watched Turner lead the race for eight laps. Then the blade on his Hornet engine snapped off. In a split second decision, Turner landed the smoking plane with a couple of bounces in front of the finish line stealing the show.

The Air Races continued to be successful despite the Depression. Therefore, the National Aeronautical Association gave Cleveland a five-year option on the event. However, in 1936, the expansion at Hopkins forced the races to move to Los Angeles. The Thompson Race returned the next year, and it proved to be the most exciting yet. Earl Ortman in his black Bromberg Special was battling Roscoe Turner’s plane neck and neck most of the race when Turner’s oil-splashed windshield made him think he had missed a pylon. As Turner re-circled the pylon he fell behind Ortman. Ortman throttled back saving his engine because he had thought he won. However, Rudy Kling, an auto mechanic from Illinois, raced past Ortman just as they passed the finished line. Kling beat Ortman by an amazingly close time of 256.858 to 256.910 miles per hour.

In 1938 the National Aeronautical Association announced rule changes to what was becoming known as the Cleveland Air Races. There would only be two high-speed events, the Thompson and Greve races. The qualifying races would decide the best starting positions. Once again the Thompson Race was increased to 30 laps around a 10-mile course. In addition a record pre-war purse of $45,000 would be shared. Only eight planes qualified for what was billed as “300 miles of the world’s toughest flying.” Roscoe Turner was again the favorite. He won his second Thompson Trophy when Ortman missed a pylon.

As the war took shape in Europe, it became difficult for the pilots to gain financial support necessary for the increasingly sophisticated planes. Some pilots became creative. For example, Roscoe Turner traveled with a lion cub in his plane to generate publicity and an image. However, after Turner won the Thompson Trophy for the third time in 1939 (allowing him to keep the trophy), he announced his retirement thus ending an era. In addition the military was withdrawing its support from the Air Show industry and there were no new airplane designs. As America geared up its war machine the races were discontinued. 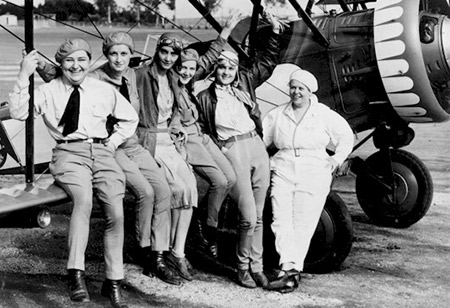 Over the years the publicized accidents and deaths linked with the races were often blamed for hampering the airplane’s evolution as a means of transportation and communication. However, the races stimulated engine and structural innovation, which helped America win the war.

After the war the Aircraft Industrial Association, an aircraft manufactures trade group, brought back the races to Los Angeles and Cleveland to showcase the advances made during the war. Cleveland once again obtained a five-year franchise for the event.

The planes developed during the war dwarfed older aircraft but pilots could obtain used fighter aircraft like surplus P-51s for as little as $1,000. The 1946 event had a jet division and large scale military participation. Ninety pilots from across the country entered their modified surplus planes. Competition was intense after the seven-year layoff and the planes plus pilots had to pass strict safety/ability tests. Over 180,000 spectators paid to see Tex Johnson a 32 year old test pilot win the reciprocating engine (propeller) division at a speed of 373.908. That was 90 miles per hour faster than Roscoe Turner’s time in 1939.

For the next two years Captain Cook Cleland, a 29 year old Clevelander, former Thompson Products employee and WWII Navy flying ace became the man to beat. Cleland purchased two Navy Corsair fighter planes and modified them to win the 1947 and 1949 races. However the 1949 races were overshadowed by a tragedy. Bill Odam was in pursuit of Cleland was his green Mustang banked too sharply around the second pylon, cut inside the course, flipped upside down and crashed into a Berea home, killing a young mother and her baby son. It was the first time that anyone other than a participant was killed.

The present series of Air Shows at Burke Lakefront Airport began in 1964 with the help of George Steinbrenner and Cleveland’s Port Director, Noel Painchaud. In 1965 the second Greater Cleveland Air Show featured the U.S. Air Force Thunderbirds, the U.S. Army Golden Knights and a fly-by of a Strategic Air Command Convair B-58 Hustler four-jet, supersonic bomber. In 1967, racing returned to Cleveland for the first time in 18 years with a closed-course Formula I race. Fifty race pilots participated and the nation’s top aerobatic pilots on the program included Hal Krier, Bill Fornof, Charles Hillard and Bob Hoover.

Since the late 60’s, the Cleveland National Air Show has continued to bring the finest in aviation with the first baton pass between wingwalkers and the first Ohio appearance of the British Airways Concorde. Cleveland was also the first stop on the historic 1991 Soviet MiG-29 Friendship Tour and has received the “Air Show of the Year” award from World Airshow News. The Air Show has become an annual Cleveland Labor Day Weekend tradition attracting over 100,000 spectators and aviators from all over the world.

Would you like to learn more about the Air Races? The National Air Race Project offers extensively researched stories containing hundreds of vintage photographs and hours of period film footage …much of which has never before been published.  To view a video about the 1939 Cleveland National Air Races click here: https://www.youtube.com/watch?v=k_NlDKohGfU