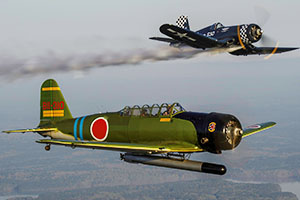 The 2017 Air Show “Rocked the Runway” with the U.S. Air Force Thunderbirds! The show experienced fall like temperatures, winds and rain on Saturday, but all the performers flew and the fans were treating to an awesome flat show by the Thunderbirds. The weather slowly improved on Sunday and by Monday it was picture perfect. Air Show fans experienced the thrill of military aircraft including the U.S. Navy Super Hornet demonstration, U.S. Air Force A-10 fly-by, and Ohio Air National Guard C-130 Demonstration. They were joined by air show legends Sean D. Tucker and Bill Stein who performed jaw-dropping solo aerobatics. History took flight with a rare de Havilland D.H. 115 Vampire Jet and WWII Pacific Dogfight featuring a Corsair and a Japanese “Kate” Torpedo Bomber. Spectators inside the gates explored the C-123K “Thunderpig” and B-25 “Champaign Gal” aircraft exhibits as well as several other interactive displays including the EAA Spirit of Aviation and the Go Army Experience. Due to the impact of Federal Government Sequestration budget cuts on the Department of Defense, the number of military static displays were limited to civilian air shows.