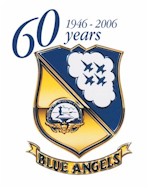 Cleveland ‘s 2006 edition of the annual aerial extravaganza recognized the 60th Anniversary of the U.S. Navy Blue Angels. “2006 was a special year to host the Blue Angels,” said Air Show Executive Director Chuck Newcomb, “the Blue Angels performed at the National Air Races in Cleveland during their inaugural 1946 demonstration season and so it was fitting they return to Cleveland for their historic 60 th Anniversary.” Despite Saturday’s frequent rain showers the U.S. Navy Blue Angels performed and brave spectators were treated to the Blue’s flat show. As the weather improved over the weekend strong crowds prevailed and the event was a success.

The 2006 Air Show also included a one day “fly-by” of the F-22 Raptor and was the first “sneak-peek” of this aircraft in Cleveland. Other fly-bys included the B-1B and F-117 Stealth, while an A-10 Warthog and C-130 Hercules demonstrated their capabilities along with two of the world’s most historic military jet trainers, the Red Knight Lockheed T-33 Shooting Star and Polish Iskra. On the ground, fans experienced Shockwave Jet Truck, the Wall of Fire, more than 50 aircraft, interactive exhibits and high-tech simulators along with an improved Souvenir Program with trading cards and a Blue Angels poster plus a jumbo TV screen with up-close looks at pilots and their planes.