Clifford W. Henderson, founder of the Cleveland National Air Races in 1929, was a pioneer among the early and spirited proponents of flight.  He had the foresight to see that aviation would play a vital part in our country’s business and economic growth.  Together man, machine and developing technology would shape the growth of modern transportation well into future decades.  Henderson also knew that the success of aviation was dependent upon the commitment of others with these same beliefs.
The annual Clifford W. Henderson Achievement Award is a tribute to those outstanding individuals, who by their involvement and dedication, have demonstrated a profound “belief in aviation.” 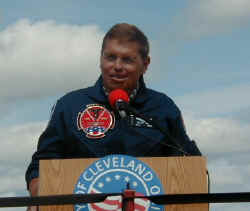 Pilot, Patriot, Photographer and Author – Brian Shul has been part of the Cleveland National Air Show for more than 25 years.

Brian is a highly decorated combat veteran with over 4,900 hours in fighter aircraft. Against all odds, he returned to flight status after sustaining life-threatening injuries when shot down on his 212th combat mission in Vietnam. Brian was assigned to the first operational Air Force A-10 Squadron and was among the few pilots selected to demonstrate the plane at public Air Shows. Then, for four years, he piloted the world’s fastest airplane, the SR-71; one of only 152 aviators to do so.