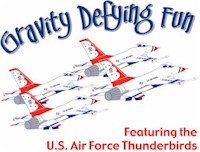 The 2011 Air Show was Gravity Defying Fun with the U.S. Air Force Thunderbirds. The weekend was a wild weather ride with temperatures on Saturday in the 90s and dipping to the fifties on Monday. But everyone flew and fans saw a terric show.

The Cleveland National Air Show also hosted the CAF Red Tail Squadran Rise Above Traveling Exhibit. The RISE ABOVE Traveling Exhibit is one-of-a-kind…housed in a 53′ long customized trailer with sides that slide out to create a 30-seat climate-controlled movie theater with a 180-degree screen. The exciting original movie, “RISE ABOVE”, is about the Tuskegee Airman.