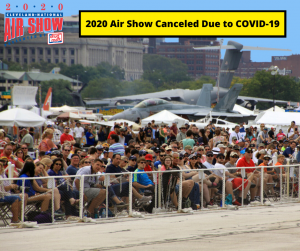 The Cleveland National Air Show presented by Discount Drug Mart, scheduled to take place September 5, 6 & 7 (Labor Day Weekend), has been canceled due to the Coronavirus (COVID-19) Pandemic. This action is necessary in order to help prevent the spread of COVID-19 and to comply with State, County and City Health regulations, which prohibit large events and mass gatherings.

“After considering the health and safety of the thousands of people involved in the Air Show as well as the large crowds that gather outside the gates on beaches, buildings, parks, etc., the Executive Committee of the Cleveland National Air Show, Inc. Board of Trustees made the difficult decision to cancel this year’s Air Show. Though regrettable, this action was necessary to protect the spectators, exhibitors, volunteers, vendors, performers, concessionaires, sponsors and employees,” said Air Show Executive Director Kim Dell.

The Air Show has been a Northeast Ohio Labor Day Weekend Tradition since 1964, attracting 60,000 to 100,000 visitors to Burke Lakefront Airport and making it one of the region’s largest annual events. On average, the Air Show draws attendees from 35 states and several countries including Japan, Australia, Canada, Germany and Italy.

The Air Show is a financially self-sufficient nonprofit organization that relies on ticket sales, corporate sales and community support to offset the costs of producing the event. The Air Show has an annual positive economic impact of $10 million+ on the City of Cleveland.

“On behalf of the Cleveland National Air Show Board of Trustees, we would like to thank all of the sponsors, vendors, dedicated volunteers and fans for their continued support and patronage. It is their efforts and community involvement that has kept the Air Show flying for 50+ years,” said Air Show Executive Director Kim Dell.